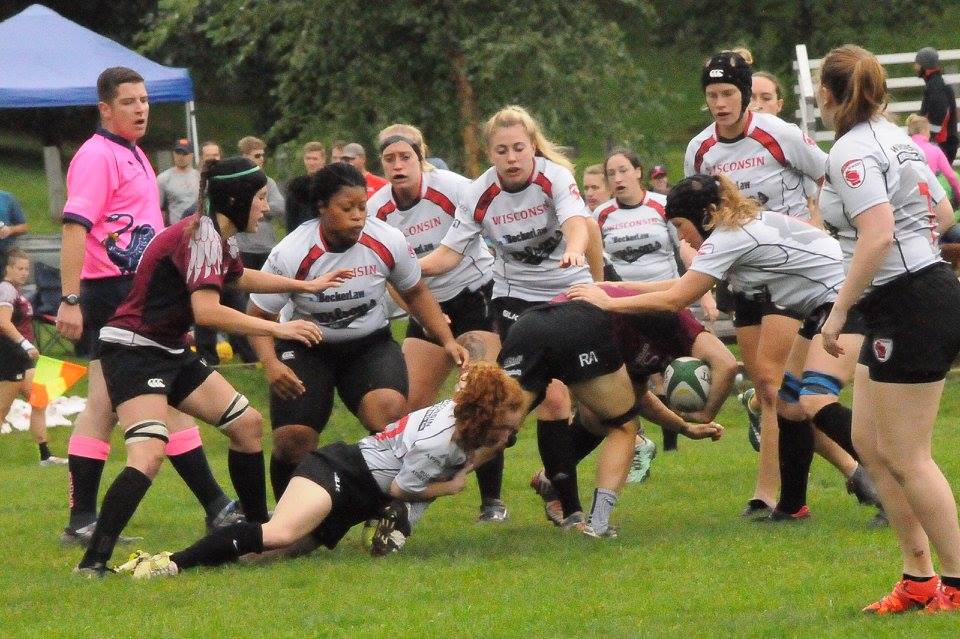 What a way to end our fall season! Wisconsin Women’s Rugby Football Club pulled off a spectacular win against the Minnesota Valkyries October 29, and added another W to the record. It was a physical battle the whole way, but we pulled it off and finished the season on a 40-26 victory.

Right off the starting kickoff, Wisconsin made it clear we were ready to play. Defensive launching was a major goal going into the game, and we executed it quickly. We received the kick to start the match, and although were stopped in our own zone, we got the ball back thanks to a huge launch that caused a Minnesota turnover. 8-man and forwards captain Grace Hovde came up with the ball and found a gap, eventually brought down by the Minnesota 10. Luckily, lock Brittany Aprahamian was close behind in support and finished the job. Try Wisconsin! 5-0 no kick.

We were met with tough rucking after the resetting kick. Minnesota was eager to keep ball possession, but were called for not releasing in a ruck. After a not straight line out from Wisconsin, the Valkyries elected to scrum and had quick hands out to their wing. It looked like they were going to get a break, but wing Brooke Tashner was able to chase them down and bring their player out of bounds. Line out to Wisconsin, and this time it was textbook. Our backs had fantastic hands out to wing Felicia Carlson, and she brought in her first try of the game. Fly half Elisa Becker connected that time on the conversion, and we extended the lead to 12-0.

Scrumming took over for a bit after that, and Wisconsin came close to back-to-back tries off a won scrum and chip kick from Becker. Play stalled right on the Minnesota try line for a few phases, while our forwards attempted to punch through their defensive line. Somewhere in the chaos, a knock on was called and the Valkyries took over possession and took another scrum. Sloppy hands from Minnesota led to another turnover, and Carlson capitalized. She ran the ball in from around the 22, and tallied another try for Wisconsin! Becker with the made kick (#heatingup) and it became 19-0 good guys.

If you blinked you missed it, but Wisconsin then turned around and pulled off back-to-back tries for real with a big catch off the kick from hooker Emily Mastandrea. After getting the ball wide, inside center Katie Klas took off with support from Carlson on the way. Klas made the successful offload, and Carlson scored her hat trick. Becker yet again made the conversion kick (#onfire) and we happily took the 26-0 lead.

Turnovers and penalty calls caused for a string of scrums to take place, with the Valkyries getting closer and closer into Wisconsin territory. They only got as far as our 22 however, until a knock on happened and Becker kicked the ball all the way back to their zone. We put up a good chase, and brought play out of bounds after Minnesota attempted to run it back up field on the outside. The Valkyries lost possession off the line out, and it was Tashner with the breakaway! Try! Another made kick courtesy of Becker, and score became 33-0.

Minnesota got one try in before the halftime whistle blew, but had to really put the work in to make it happen. Wisconsin had great support after tackles and solid rucking, but a couple penalties had us retreating farther into our own zone. Eventually the Valkyries took advantage of those penalties and managed to touch the ball down in the try zone. 33-7 was the score going into the half.

The Valkyries weren’t done yet heading into the second half however, and racked up a few more tries of their own. More and more scrumming took place, and when their forwards couldn’t drive us back anymore, Minnesota got it wide to their wing. Carlson clearly wasn’t done either though, and picked off their pass and outran everyone to the try zone. That was her fourth try in case you weren’t keeping count, and Becker made one last kick. 40-7 Wisconsin lead.

Minnesota answered right back however, and scored almost instantly off a steal of their own. A made kick from them as well brought the score to 40-14. A couple more turnovers from both sides, and what seemed like a hundred scrums later, the Valkyries finally found some gaps and ran in another. 40-21 with around ten minutes left of play. Minnesota would score once more before time expired, but fullback and backs captain Ashley Shaw left her mark (probably literally) after somehow making three big tackles in a row in a valiant effort to stop them. Good game Minnesota, but Wisconsin took this one 40-26 final score.

A big thank you to the fans that came out to support us, and three cheers for our captains who took it upon themselves to work our butts off all season. We feel extremely lucky to have such dedicated players both on and off the field, and an extended wealth of resources to help us in our first season back in Division One. See you in the spring!

Back of the Match: Sarah “HMB” Pinkston (Outside center)

2 thoughts on “WWRFC vs. Minnesota Valkyries”