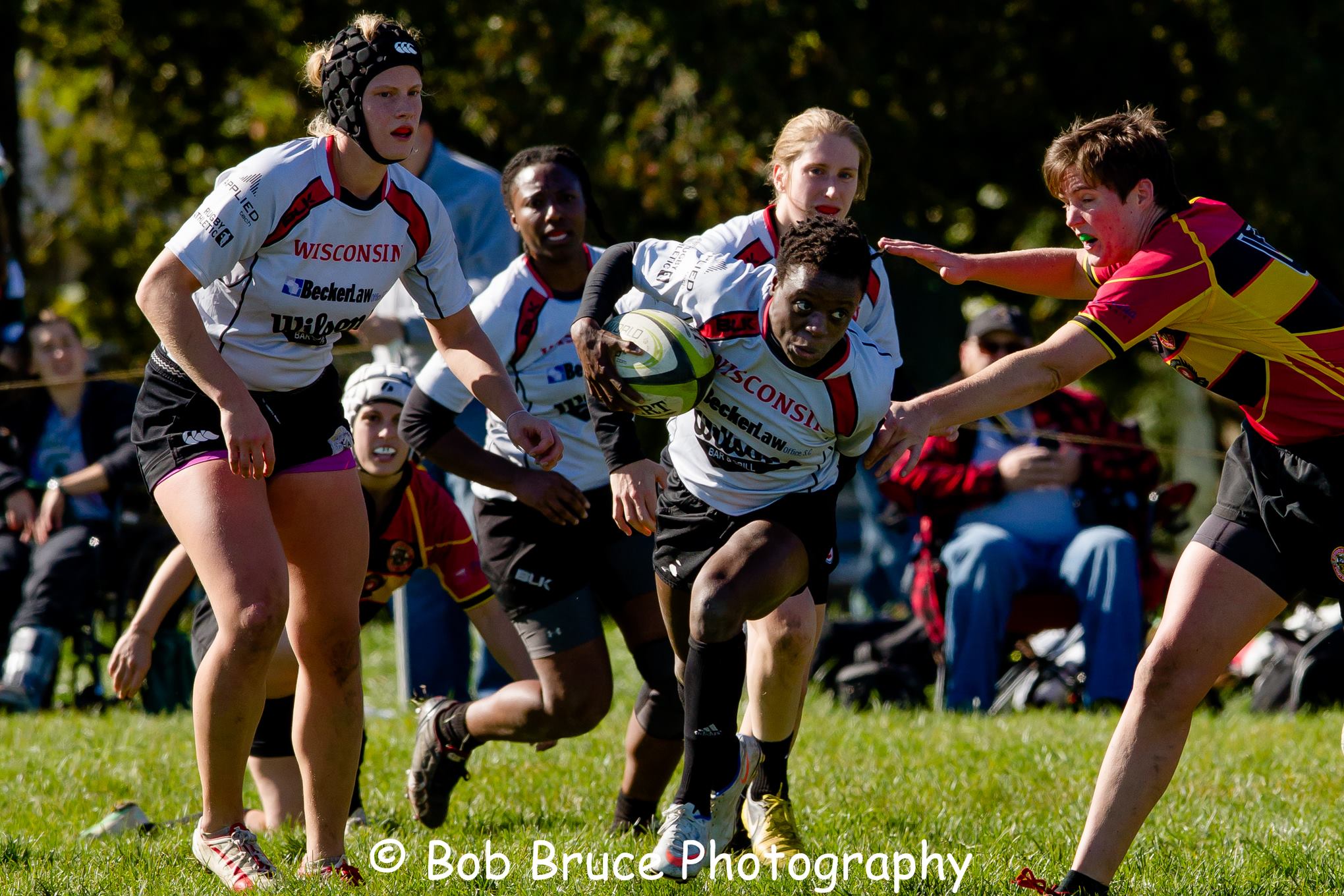 We had a great time this past weekend traveling to 8 Mile Road in Detroit for a league game against the Detroit RFC Women on October 22. Final score might have been 86-14 in favor of Detroit, but it can definitely be said that we gave it our all. We were unable to roster a full 23 players for the match, and everyone really stepped up to deal with position-shuffling and covering for injured/sick players.

Right off the kick, Wisconsin hustled the ball down into Detroit territory and attempted to battle it out just meters off their try line. However, Detroit took advantage of poaching opportunities and were able to get it wide to their speedy wings. This proved to be our biggest problem and a common theme for the rest of Detroit’s scores throughout the game, and right away they were up 7-0 with a made kick.

The game appeared at first to be another close one, as minutes later we answered right back with a try from wing Felicia Carlson. Although we had been called for a penalty soon after the resetting kick, we got it wide off a line out and Carlson took off running. Elisa Becker added her 2 points, and we were briefly tied at 7.

Both teams went hard after those back-to-back tries and play turned very physical. Huge tackles and fantastic rucking from both sides contributed to a slower pace, and possession went back and forth. Wisconsin had a few penalties that allowed Detroit to inch closer to our try zone, and eventually they capitalized off them. We held them for a few phases right at our try line, but Detroit continuously attacked our defensive line and managed to touch it down. Another made kick, 14-7 Detroit.

Unfortunately for us, Detroit’s defense had continuously great pressure throughout the game, and even though we could get the ball fairly deep into their zone, our support wasn’t always there and a combination of poaching and fast breaks led to Detroit’s next few tries. The first, they had fast hands out and caught us on a break, 21-7. For the second try, we lost the ball in loose play and another fast break on the outside led to a 28-7 lead for Detroit.

We started making them work a bit more for their next try, and our teamwork played a huge part in that. Again, Detroit was right at our line, and again we held them there for multiple phases. Detroit started to get impatient and tried to get it out to their backs, but didn’t create enough space and our wings were able to stop their breaks. The ball went back into the hands of their forwards, and they snuck around us for a corner try. Kick didn’t go, 33-7 Detroit.

Detroit managed to get the score to 52-7 before the half time whistle blew. Wisconsin made smart plays and connected on the majority of our tackles, but Detroit caught us in overloads and were able to steal possession back every time we started making progress. They got a few more tries, and we went into halftime.

Wisconsin looked more organized at the start of the second half; we split the field more evenly, and had better communication going into rucks. We were able to contain them around the 50-meter mark for quite a few phases of play, until they whipped the ball wide and took off into our zone. They couldn’t get out of the corner though, and their kick went wide. 57-7 Detroit.

We got incredibly close to punching in a try after an attempted kick for points from Becker, with our offense taking its turn at attacking Detroit’s defensive line. Flanker Alayna Hronek found the gap and tried to touch the ball down, but Detroit managed to hold it up. They made it clear they weren’t about to let that happen anymore, and responded with a few more tries in quick succession. Score crept up to 76-7 with around fifteen minutes left in the game.

Wisconsin added one more try to our score before time expired, with 8-man and forwards captain Grace Hovde getting the ball to Carlson, who jogged it in from 40 meters out. Becker hammered the kick through the uprights, and that was it for Wisconsin. Detroit worked in a couple more tries in the last few minutes, and the game ended with a final score of 86-14. Thank you Detroit for a great game, a fun social, and also for hosting some our team for the night!

Back of the Match: Ashley “Shaw” Adams (Backs Captain, Scrumhalf)

*Next Up: WWRFC vs. Minnesota Valkyries in Cottage Grove, Wis. 10/29