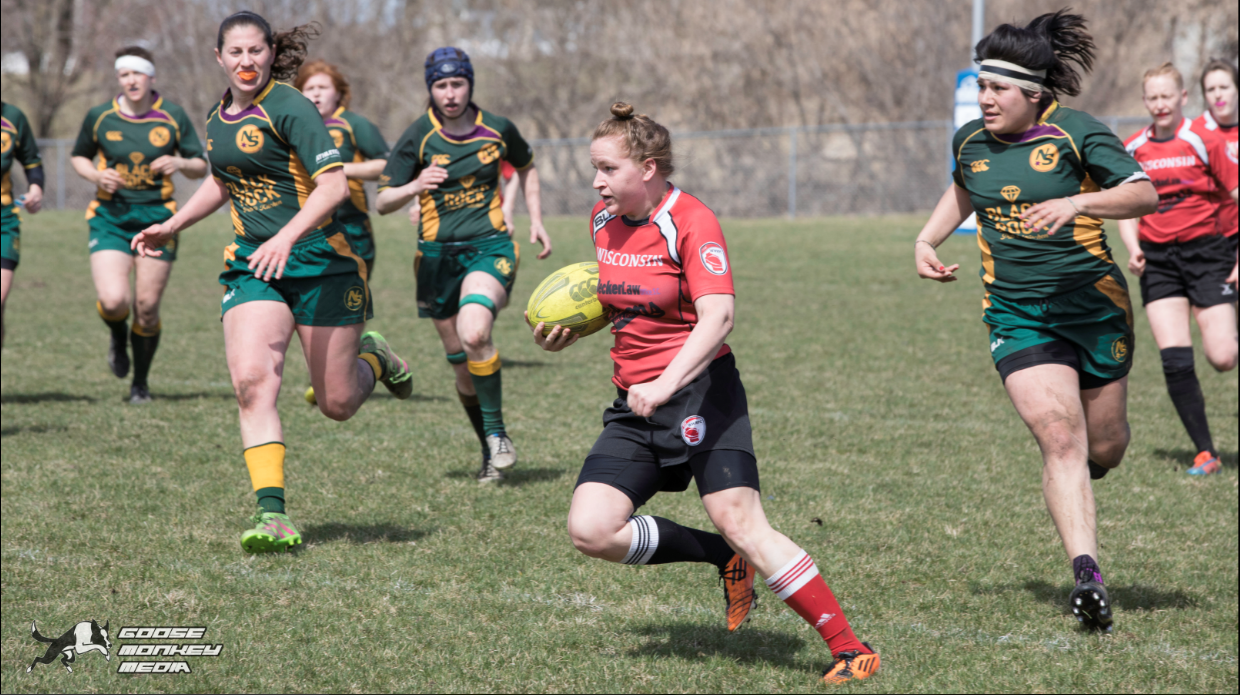 Happy spring! We are so happy to be playing outside again, and to be able to fully stretch our legs after a long winter. Chicago North Shore came to town on April 1 and gave us our first match of the spring season. We ended up losing 60-5, but put up a much better fight than our first game against them in the fall, and we were impressed with how well we played right out of the gate.

The game started with Wisconsin receiving, and a string of sloppy movements led to a turnover that North Shore capitalized on. They ran it into the try zone and made the kick, Wisconsin quickly down 0-7. However, we managed to hold them at that score for quite a while. Possession went back and forth due to forward passes, big tackles, poaches, and line-outs. Our defense looked sharp and present at the rucks, with pretty much everyone stepping up to commit to tackles and support each other. Offensively we tended to make progress, but were eventually stopped by scrappy North Shore plays and our own sloppy passes. Our back line was able to work the ball out quickly, but we just couldn’t penetrate their defensive lines. Eventually, North Shore caught us on an overload and ran it in for their second try. No kick, 0-12.

We reset and continued to keep North Shore away from our try zone. A few won scrums and excellent chip kicks brought us closer and closer to their try line, but the support wasn’t always there, barring any results. Several scrums later North Shore was finally able to get it wide to their speedy backs, and another try was touched down, 0-19. Not being able to contain their speed and periodic low support in rucks led to a couple more scoring opportunities for North Shore before the half. 0-29 North Shore at halftime.

Unfortunately, this game produced many injuries for us. A few minutes were taken early on the second half for injuries, but luckily our players seemed to bounce back. Penalties against North Shore led to frequent opportunities for Wisconsin, but try as we might, we ended up on our heels trying to catch-up with lost possessions. North Shore scored first again out of the half, and the score was briefly 0-34. Finally, we had enough of North Shore causing penalties, and 8-man Grace Hovde was able to quick tap and go into the try zone. Wisconsin on the board, 5-34. Substitutions were made, the game went on, and North Shore gradually tallied up tries and kicks to get us to a final score of 5-60. Good game ladies!

Back of the Match: Shannon Walsh (Flyhalf)

Immediately following the league match, both Wisconsin and North Shore were able to field enough players for a B-side 14 v 14 match. Both teams put up a good fight for the majority of the game, and we got plenty of scrum and line-out practice in. Some of our players were able to try out new positions, and our rookies put on a show giving no signs of hesitation. Well done to all! It was a rugby game like any other rugby game, and nobody managed to score until the final minute of the game when after an originally held up try, North Shore was able to win a scrum and finally touch it down. A fairly uneventful game, final score 0-5 North Shore, but a great learning experience for everyone, and really nobody was complaining about getting more playing time. We ended the day identifying what went well, what to focus our practice time on, and of course with lots of food. Great day of rugby, Wisconsin!

Back of the Match: Melanie Eck (Wing)

*Next Up: WWRFC is traveling to Chicago to take on the Chicago Women 4/8.