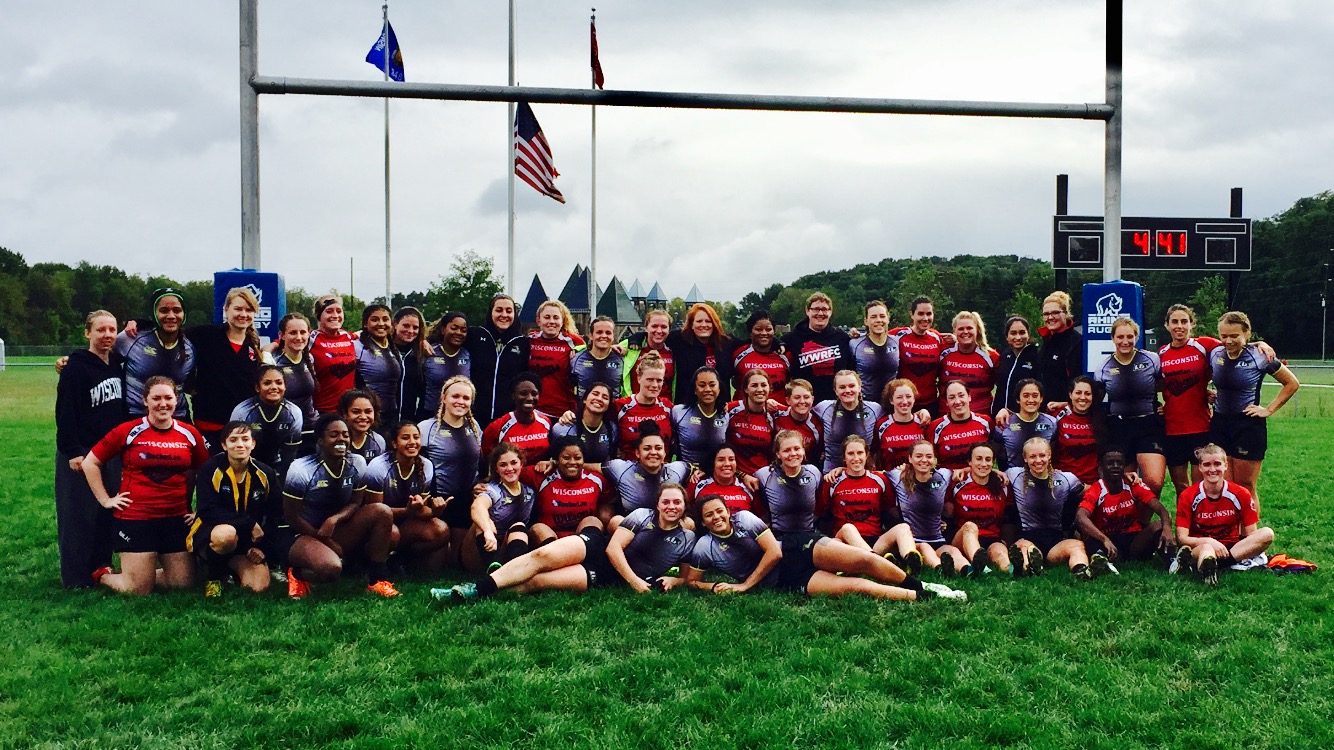 First things first, three huge cheers for Lindenwood University Women’s Rugby for making the long bus trip to come to Cottage Grove to play in a friendly against us last Saturday! We’re so thankful that they were able to come and play in less than ideal conditions so we could get an extra fall game in. It was a fun game, and although Wisconsin fell 44-0, we are so proud of our players for trying out new positions and giving it their all.

Rain was falling, wind was blowing, and we kicked to Lindenwood to start the game. Almost right away, Lindenwood kicked for touch and we had our first scrum down. Although Wisconsin won the scrum, loose play resulted in a lot of back and forth and there ended up being multiple scrums in a row. The ball was slick due to the rain, and it caused a lot of turnovers from both teams. Eventually, Lindenwood worked it down into our zone and, thanks to a penalty from Wisconsin, were able to kick for points. The kick made it through the uprights, and Lindenwood took a 3-0 lead.

Wisconsin quickly made our return kick, but with a won scrum from Lindenwood they inched closer to our try line. Another scrum occurred, and Wisconsin took a feeding call. Lindenwood took advantage of the call and quick tapped to bring the ball in for a try and a made kick. Score was 10-0. Almost immediately, Lindenwood regained possession in loose play and used their speed to get in another score. Unfortunately, our tackles just weren’t connecting, and Lindenwood ultimately scored one more time before half. Neither kick was good, so we went into half down 20-0.

A few minutes into the second half, Wisconsin made some substitutions hoping to get fresh legs on the pitch. We improved on applying more pressure off our defensive launch, and it caused scrappy play from Lindenwood. They managed to keep possession however, and scored again about 10 minutes in. Score became 27-0 after a made kick. We were able to make some progress after gaining possession off the kick, but a turnover resulted in a Lindenwood breakaway. They scored once again, 34-0.

Despite better rucking and more aggressive defense in the second half, Lindenwood was able to punch in a couple more tries before the final whistle. One off a 5 meter scrum in our zone, and their last simply from outworking our defense to keep possession. We forced more turnovers and sloppy play, but couldn’t capitalize off them. Although the final score wasn’t what we wanted, we were pleased to see improvement throughout the game, and had a great time socializing with both Lindenwood and our men’s team who also played a couple games that day. Saturdays are rugby days, and we look forward to the next one!

*Next up: WWRFC vs. Chicago Women on Saturday, October 15 in Cottage Grove, Wis.

Back of the Match: Brooke Tashner (Outside Center)