The Wisconsin Women were featured by USA Rugby on the national governing body’s website and social media channels March 24. 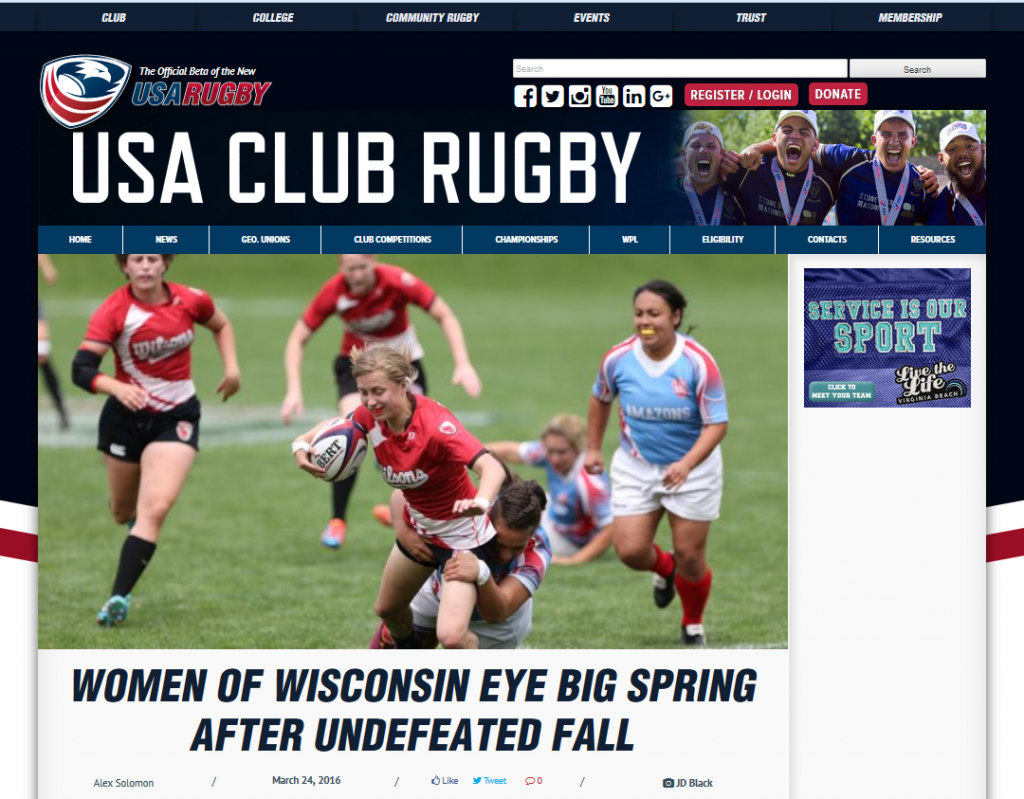 Here’s the article via USA Rugby:

“If we do well in the Midwest, I’m sure the excitement and hunger will grow, but no one is looking ahead.”

LAFAYETTE, Colo. – Wisconsin Women’s Rugby Football Club’s 2015 Division II National Championship took some by surprise. However, Wisconsin’s form and undefeated 2015-16 record is proof the squad from Madison is far from a one-year wonder.

A 2015 fall campaign produced a 7-0 mark and a plus-267 point differential for Wisconsin against its Midwest rivals. Still, the reigning National Champion’s road to the 2016 Midwest Playoffs has not been as seamless as its unblemished record would indicate.

“The fall season has been a sorting out process for us as much as anything,” Head Coach Bob Jafferis said. “We lost four starters from last year’s Championship game, and several other players that have started a lot of games for us have also retired or moved on. In addition, we had several players change positions for this year.”

It is going to take more than a few retirements and some tinkering of combinations to slow down a club with a 41-year history. While less-experienced players have done well to fill roles in the first XV, several Wisconsin stalwarts have somehow continued to up their game and the club’s stakes.

Up front, tight head prop Melissa Polheber leads one of the best front rows Jafferis has ever coached. In the back row, open side flanker Kris Peterson is heavily relied on for her energy and go-forward ball, and No. 8 Grace Hovde is always dangerous with ball in hand.

Not to be forgotten is 2015 National Championship MVP Justine Wypych. The quick-footed winger continues to be a thorn in the foot of opposing defensives, dotting down nine times over six conference games this past fall.

The experience of outmatching an established Sacramento Amazons team, 38-28, in last year’s Final, and carrying a 7-0 mark into the spring has not encouraged Wisconsin to make any plans beyond its April 30 opening-round Midwest Playoff fixture.

“I don’t think anyone is looking beyond the Midwest,” said Jafferis. “They know how tough it was last year to win and advance. So, they know to expect a big challenge. If we do well in the Midwest, I’m sure the excitement and hunger will grow, but no one is looking ahead.”

One final conference game remains on Wisconsin’s schedule, an April 16 visit to Milwaukee to face Scylla, but the top seed out of the Midwest DII West 2 league is all but claimed by the women who train out of Cottage Grove, Wisc. That top seed spells a Midwest Semifinal against either the Chicago Sirens or Fort Wayne. Historically, Wisconsin holds a favorable record over the Sirens, whereas the reigning champ has never faced Fort Wayne.

A victory in the Midwest Semifinal could potentially set up a regional final versus Chicago’s County Will Morrigans. The Morrigans are having an equally impressive season, as the team’s lone loss came to the Minnesota Valkyries’ Division I side.

“We think we are positioned to do well, but we have a lot of respect for the other teams in the Midwest,” Jafferis commended.

If it sounds like Wisconsin is humble it is because it is. But the club is also less concerned about results, and chooses to concern itself with the main reason its members still lace up the boots.

“Our first goal is always to have fun,” added Jafferis. “Rugby is a game, and we want to have fun playing.”

Plenty of rugby stands between Wisconsin and a return visit to Colorado’s Infinity Park for the 2016 Club National Championships, but one thing is for certain: the women of Wisconsin will not be sneaking up on anyone this spring.