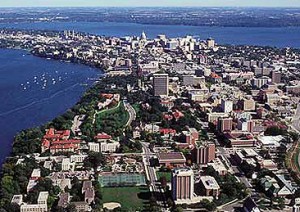 Built on an Isthmus between Lake Monona and Lake Mendota, Madison offers incredible natural beauty, stimulating cultural opportunities and a plethora of restaurants, shops and attractions. Healthcare is another of Madison’s strengths with five general hospitals, more than 20 major medical clinics and UW-Madison’s medical, nursing and pharmacy schools. Madison also boasts one of the lowest unemployment rates in the nation. (Source: GMCVB)

“A progressive, cosmopolitan city of over 200,000, Madison is home to the world-class University of Wisconsin-Madison, the seat of state government, and an eclectic, electric atmosphere that energizes any visitor’s stay. Madison offers both small town charm and a range of cultural and recreational opportunities usually found in much larger cities. And, with four lakes and over 200 parks, it is one of the nation’s most scenic cities. A host of picturesque communities, many retaining their strong ethnic heritage, surrounds the city.”

Web site for The Isthmus Newspaper
with information on Events and Culture
www.thedailypage.com